John has left Facebook, and is building his own publishing platform. Someone asked him if he was going to support commenting on his site. “Hard pass” was the answer.

There’s another path, too. For the past twenty-plus years, we’ve all had our own printing presses (and for the last fifteen of those years, they’ve been in our pockets). We all have our “own little first amendment machines.”

We don’t need “commenting systems” in order to respond and elaborate and collaborate.

We can do it on our own websites, just like this.

This is the foundation that was pioneered by folks like Dave and Doc and Lisa and Elisa and Jory and countless others.

While the big social media platforms created onramps to bring everyone into one place to interact, one key piece that was left out was accountability. Sure, some sites have used the “you own your words” policy for commenters, but without accountability, those policies are toothless.

The tools are here for thoughtful, civil, interactive discourse, if we choose to use them.

I wrote a piece over on the GoDaddy blog with some thoughts on the entrepreneur journey, and I wanted to make sure I captured a few of the key points here as well. (That said, you can hop over there to read the full thing.)

The gist: There are four key steps on the entrepreneurship journey: dreaming about what you want to do, actually getting going and creating the venture based on that idea, growing the venture, and then ongoing management once it’s up and running.

Underpinning all of that are the human factors: staying healthy, connecting with others who are also in the community of entrepreneurs, and sharing some of your energy back to the other folks who are also going down the path.

The interesting thing about this entrepreneurship journey framework is that it can be used in three ways:

A few weeks ago, I had the opportunity to present this framework at the Cal Poly SBDC incubator, with really positive feedback. (If you want to check out the full entrepreneur journey presentation and slide deck, just click that link.)

For folks who have started their own thing: Does this framework hold for you and does it align with your experience? Would love to hear your feedback!

There are a few tools I use on an almost weekly basis. Some of these help me get more stuff done, some of them help me do things better. One of these tools is Plus/Delta.

Plus/Delta is dead-simple. Two columns, one labeled “Plus” and one labeled “Delta.” You can do it on a whiteboard, on a collaborative Google Doc (here’s one), on paper, on Post-Its or on index cards. Have a facilitator scribe, or have the participants write their Plusses and Deltas on notecards or on Post-Its. Have the participants in the session articulate what worked well (“Plus”) and what they would change for next time (“Delta”). Capture everything, summarize the key points, learn from it and iterate. The whole process shouldn’t take more than 10-15 minutes. 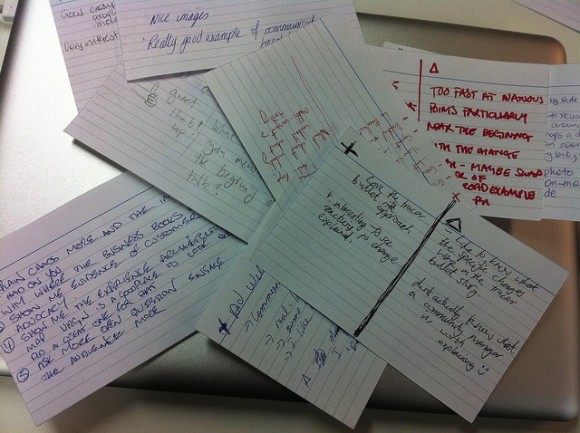 It pretty much works with any size group; I’ve used it in groups up to about twenty or so. If the group is really large, break it into smaller subgroups and have each group do its own Plus/Delta. Then have each group pick a representative to share their results to everyone in the larger group in turn.

Plus/Delta works best when you make it a default part of a process. It’s just “the thing you do after you did something else.” For example:

You can learn more about Plus/Delta in the book Gamestorming, by Dave Gray, Sunni Brown and James Macanufo. It’s one of dozens of tools in the very rich Gamestorming tool kit.

By the way, this post came about as part of the Weekly Post Challenge, proposed by Dre Armeda. You can find a few other posts from this week by Mendel Kurland, Kelley Koehler, Chris Ford, Matt Medeiros, Dre Armeda and an epic post from John Hawkins on how to produce a podcast.

image: Johanna Kollmann via cc by 2.0

(Ob disclosure: while I’m now an employee of GoDaddy, these are my personal opinions.)

This is a company that has gone through an incredible maturation process in the past few years, and where the company is now is miles ahead of where it was even 24 months ago, both in brand and in product. The T&A Super Bowl ads are long gone, the products are getting solid reviews, and a lot of attention is being paid to customers: from small businesses to web designers and developers (including WordPress, Drupal and Joomla!) to mobile and local.

In particular, I’ll be working with our customers who are web professionals, ensuring that we’re engaging with communities of designers and developers and delivering the content, community and product that help this very important constituency kick ass.

Tomorrow is my first “official” day. 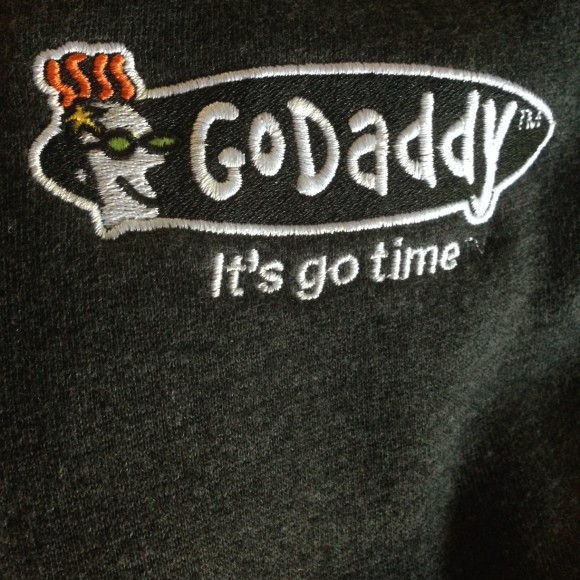 Bitcoin and cryptocurrencies are finally becoming more well known with there being a Dragons Den Bitcoin episode, more investors are paying it attention and it is increasing in price every month. It seems like only a matter of time before it breaks through into the mainstream and everyone knows about it – but what could potentially stop it from reaching the success it is predicted to have?

Bitcoin has a woman problem that, unless solved, will keep it from hitting the mainstream as a medium of exchange, at least in the US. You can tell because there are useful websites similar to https://cryptoevent.io popping up providing useful information for those who are interested in getting into Bitcoin. The following conversation is primarily aimed at the particular challenge Bitcoin faces in getting to mainstream adoption, and is not focused on the speculative rises and falls that have dominated the news cycles for the past few weeks in particular. For those who are interested in trading and cryptocurrency investment, you can find more here, but for now, discussed here will be a social issue rather than an economical one.

Right now (Dec 2013), the overwhelming majority of activity in the Bitcoin space is dominated by males. In doing a review of the market for consumer activity, and then comparing it to the market at large, it is clear that there is a significant gender gap that will need to be filled before Bitcoin can hit the mainstream as a payment mechanism in any meaningful way. Although all web statistics of this type are prone to some margin of error, these are certainly directionally correct. Read more at Coindale.

By way of a path through this whitepaper from Limelight networks and Digital Clarity Group, found an interesting presentation from this month’s Inbound Marketing Summit (#IMS13) that was created by Allen Bonde from DCG. Not only does Bonde’s presentation echo research we are seeing from the likes of Forrester and others that points to the reality of video channels becoming an increasingly important asset in the portfolio of B2B marketers, it also brings up an interesting model on the steps from engagement to action in the medium. In particular, Bonde outlines three phases of note: Inform, Connect and Motivate.

These three phases are critical, in my opinion. The things that drive initial engagement are either things that are educational or entertaining. (They’re the types of things that get saved or passed around.) As such, for a B2B marketer seeing to become a trusted advisor to her customers, skewing content toward the informational is a sensible route to take. Similarly, one needs to fish where the fish are. With social networks dominating the usage landscape, an organization simply can’t ignore their potential customers.

Which brings us to “motivation.” (And a brief mini-rant.)

As anyone who has been within earshot of me in the past couple of years can attest, I think it’s critical that we all actively work to end the process of “engagement for engagement’s sake.” On that note, “engagement” is a weak metric. In and of itself, engagement is near-worthless. What matters is the action that’s taken as a result of the engagement. That action can be the “next step” in the buying cycle, or it can be a request for further information, or it can be a phone call. But it needs to be something. The “counting metrics” don’t count anymore.

Check out the rest of Allen’s presentation here:

I always find it interesting when things get used in unexpected ways, like using a nutcracker as a bottle opener or using rice to dry out a smartphone that got soaked. So when I saw that Koka Sexton had run an experiment that sought to understand how a meme could travel on LinkedIn, I was intrigued.

What Koka did was share an on-brand and topical image into his LinkedIn network which, frankly, isn’t something one sees every day. In this case, the image was a riff on the Liam Neeson “Taken” character.

A couple of weeks ago, we linked to an article about how scientists had solved the fundamental problem in viral distribution of information. The research showed that seeding information into key groups in a network could significantly affect at what velocity and distance information spread throughout the network. Koka found that by sharing this type of content as a LinkedIn update, as opposed to the more typical link to external content, he was able to have an initial interaction with many more individuals than he typically would.

Perhaps even more interestingly, however, was Koka’s recognition that certain individuals in his network act as bridges between different parts of his overall network. (Social network analysis researchers measure this concept being a bridge or a broker as an individual’s “betweenness centrality.) In this case, he saw that many of the links to his third-degree network went through one of his colleagues and once the meme “jumped” into this other part of his network, it continued to propagate. This also showsthe strength of weak ties.

Once someone interacted with the meme, the most important thing was to take some form of action to take the first step in turning what could be a one-off engagement into the start of a business relationship. Four ways to do that included:

•   Thanking the individual for their interaction

•   Connecting with the individual on LinkedIn

“The idea isn’t to create the content, get engagement and then start pitching your product. The idea is that you share great things and then use the engagement to expand your network.” – Koka Sexton, LinkedIn

In reading the original post, it clearly cast the network that the meme traveled through into an explicit model of “1st, 2nd, 3rd degree connections.” While I know that’s how LinkedIn technically refers to individuals in the system, I don’t think I’d ever really used that frame as actively. When I look at the world, I typically didn’t go through the mental action of “do I know this person, or do I know someone who knows this person, or are they further away than that?”

A few key takeaways for me:

•   I’m definitely going to start to look for more instances where LinkedIn has worked as a medium through which information can travel, and not solely a place to build connections.

•   Need to do some more thinking on this “1st, 2nd and 3rd degree” framing of the world

What do you think? Have you seen other examples where this type of content achieved significant distribution through LinkedIn, as opposed to the more obvious venues such as Facebook or Twitter?

Check out this fun little video on the Social Engagement Journey that our team in Seattle just put together.